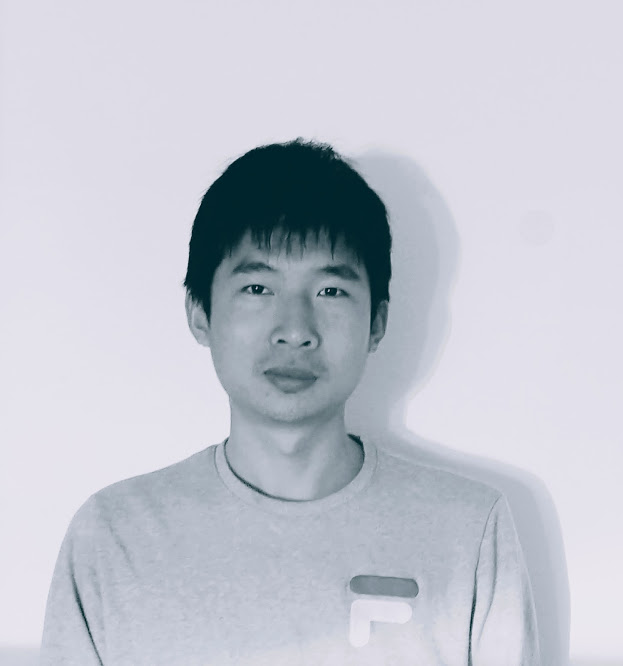 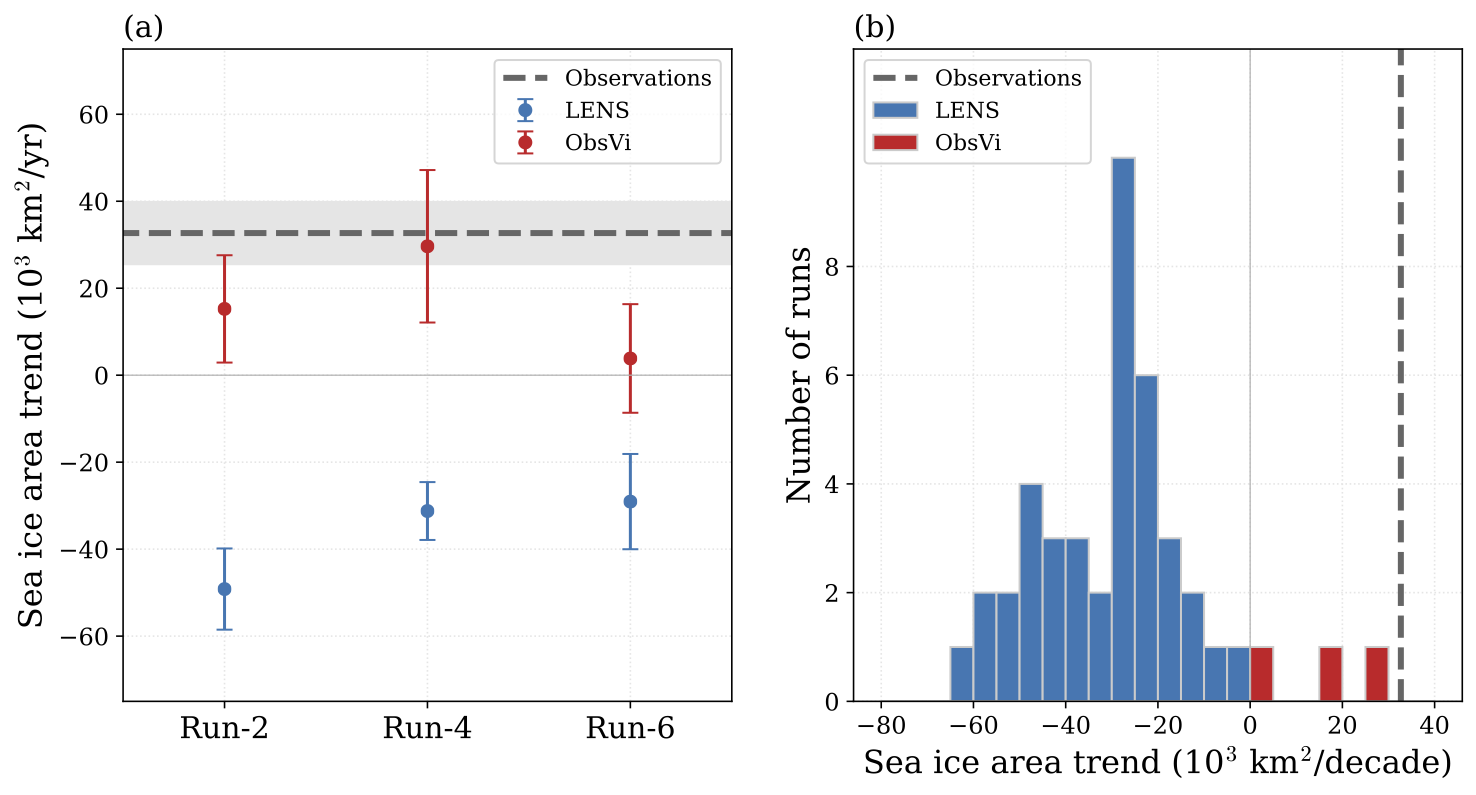 The Antarctic sea ice area expanded significantly during 1979-2015. This is at odds with state-of-the-art climate models, which typically simulate a receding Antarctic sea ice cover in response to increasing greenhouse forcing. Here we investigate the hypothesis that this discrepancy between models and observations occurs due to simulation biases in the sea ice drift velocity. As a control we use the Community Earth System Model (CESM) Large Ensemble (“LENS”), which has 40 realizations of past and future climate change that all undergo Antarctic sea ice retreat during recent decades. We modify CESM to replace the simulated sea ice velocity field with a satellite-derived estimate of the observed sea ice motion, and we simulate 3 realizations of recent climate change (“ObsVi”). We find that the Antarctic sea ice expands in all 3 of these realizations, with the simulated spatial structure of the expansion bearing resemblance to observations. The results suggest that the reason CESM has failed to capture the observed Antarctic sea ice expansion is due to simulation biases in the sea ice drift velocity, implying that an improved representation of sea ice motion is crucial for more accurate sea ice projections.

The ocean’s transient conveyor belt: Centennial changes in the ITF connected to the AMOC [a research highlight] 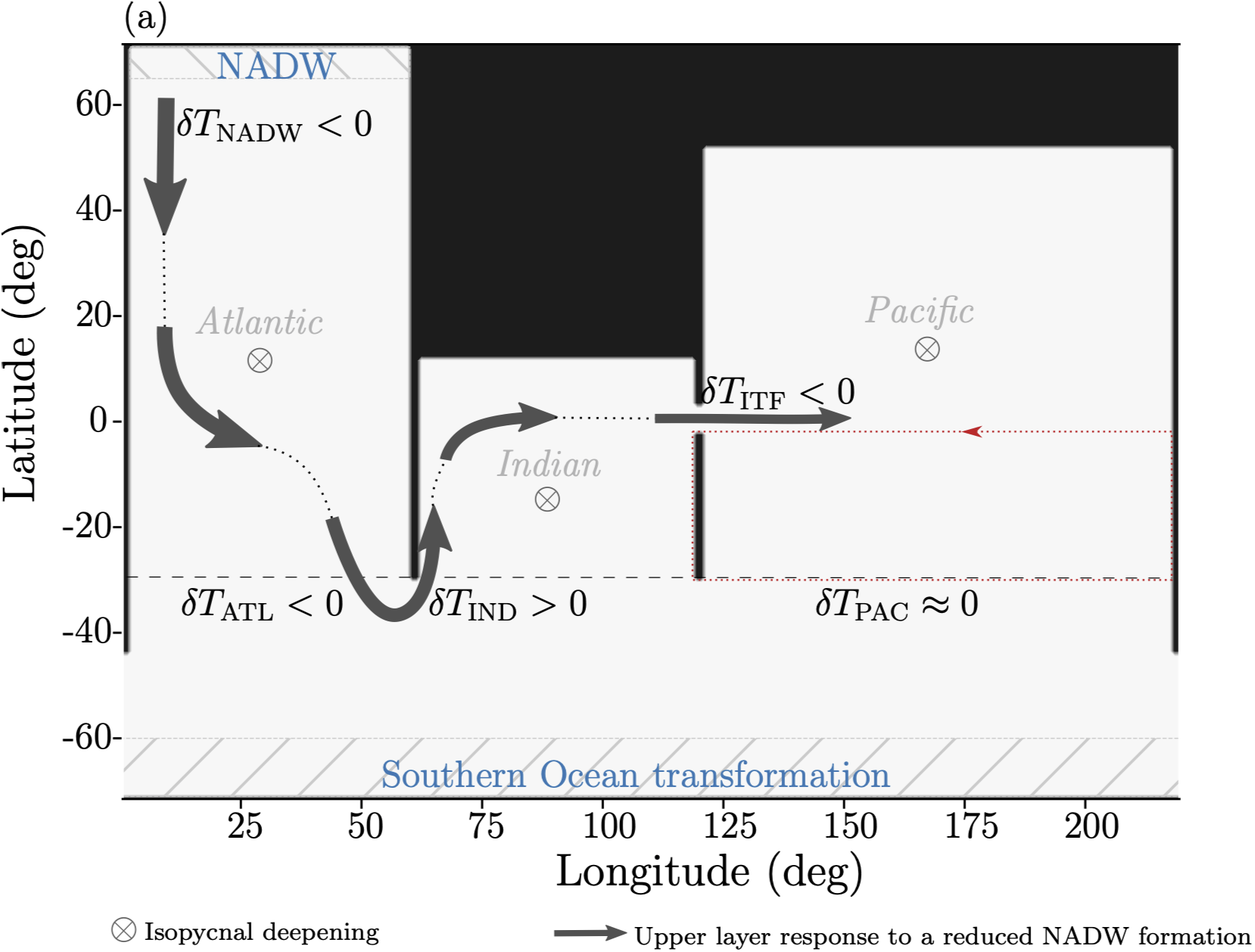 The great ocean conveyor belt is a classical logo for the global ocean overturning circulation. In this paradigm, the North Atlantic Deep Water (NADW) enters the Pacific, comes back to the surface through diapycnal mixing, and returns to the Atlantic Ocean after entering the Indian Ocean as part of the Indonesian Throughflow (ITF). However, later observational studies suggested that deep waters mainly return to the surface via along-isopycnal pathways in the Southern Ocean, with ITF playing only a small role in closing the global overturning circulation.

Here we argue that, although the conveyor belt is not an accurate representation of the mean-state global ocean overturning circulation, it is a key component of the overturning’s transient response to surface forcing perturbations. In response to an AMOC slowdown, the Indian Ocean develops a northward surface transport anomaly that converges mass and modifies sea surface height in the Indian Ocean, which weakens the ITF.

Through this transient version of the conveyor belt circulation, changes in the high-latitude North Atlantic (e.g., Arctic sea ice melt) can affect the climate in the low-latitude Indo-Pacific Ocean. An intriguing corollary is the potential to use the ITF to monitor or interpret long-term trends in the AMOC. 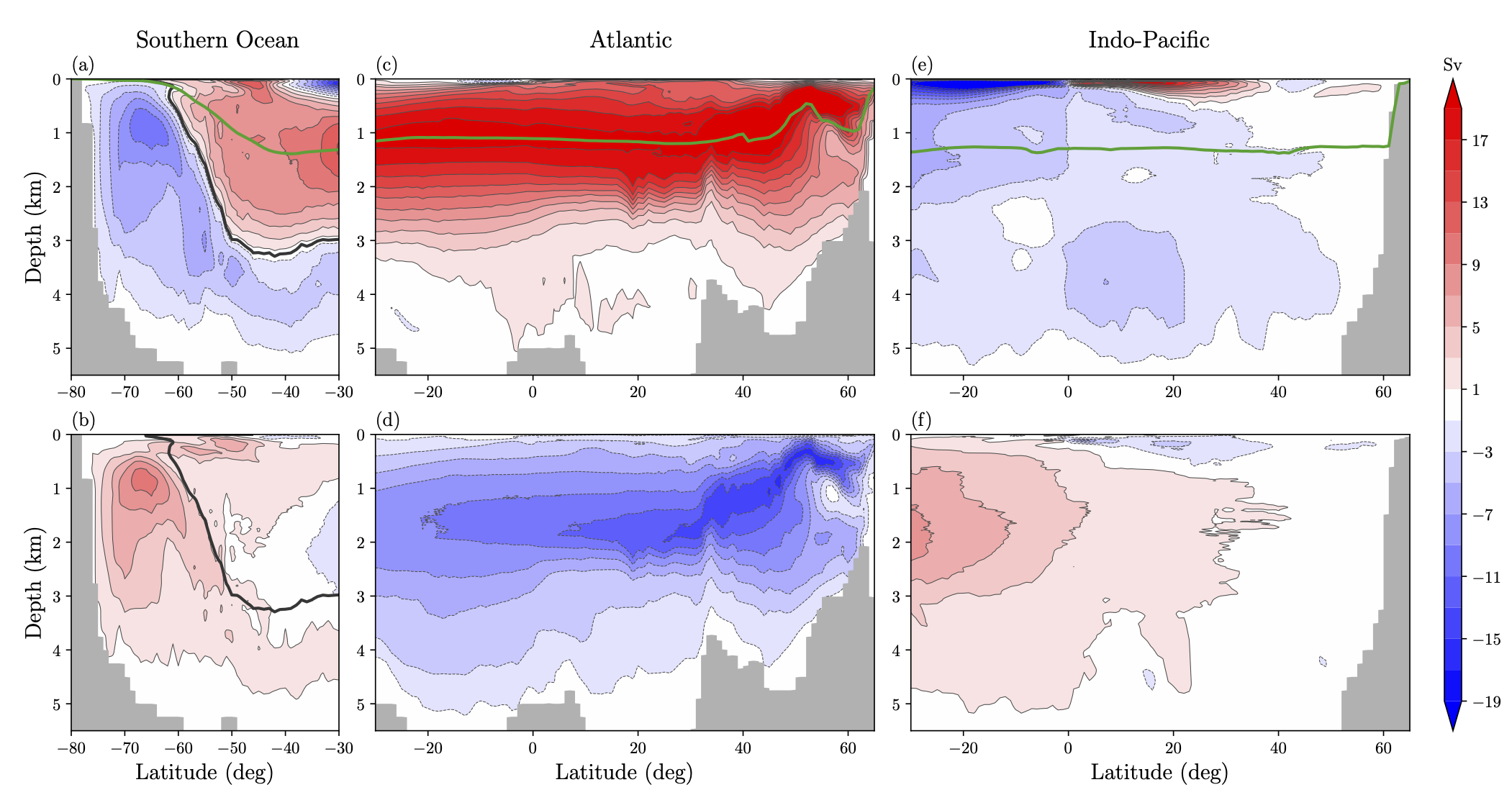 Climate models consistently project (i) a decline in the formation of North Atlantic Deep Water (NADW) and (ii) a strengthening of the Southern Hemisphere westerly winds in response to anthropogenic greenhouse gas forcing. These two processes suggest potentially conflicting tendencies of the Atlantic Meridional Overturning Circulation (AMOC): a weakening AMOC due to changes in the North Atlantic but a strengthening AMOC due to changes in the Southern Ocean (see figure above).

What sets the AMOC depth? 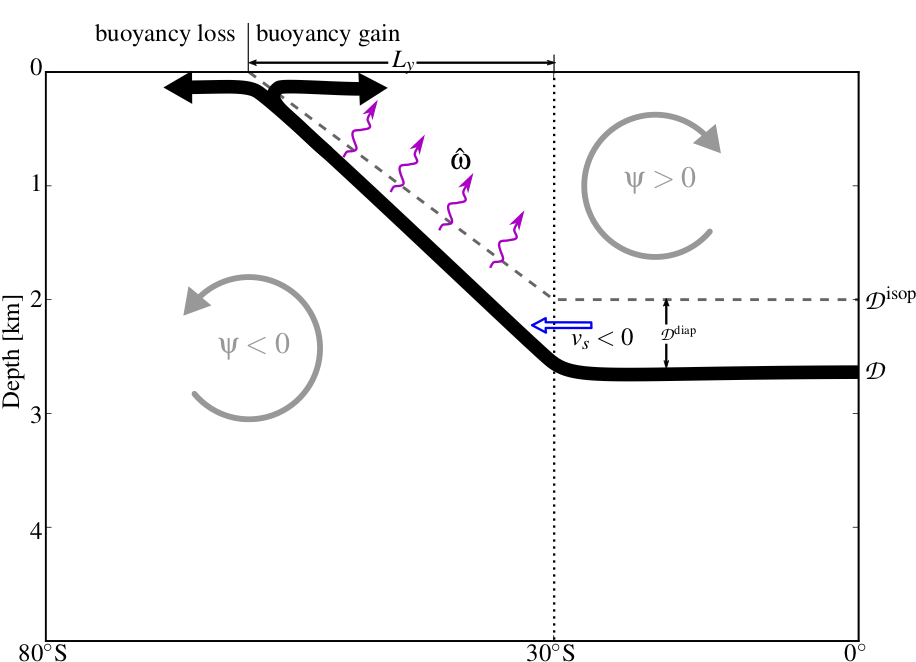 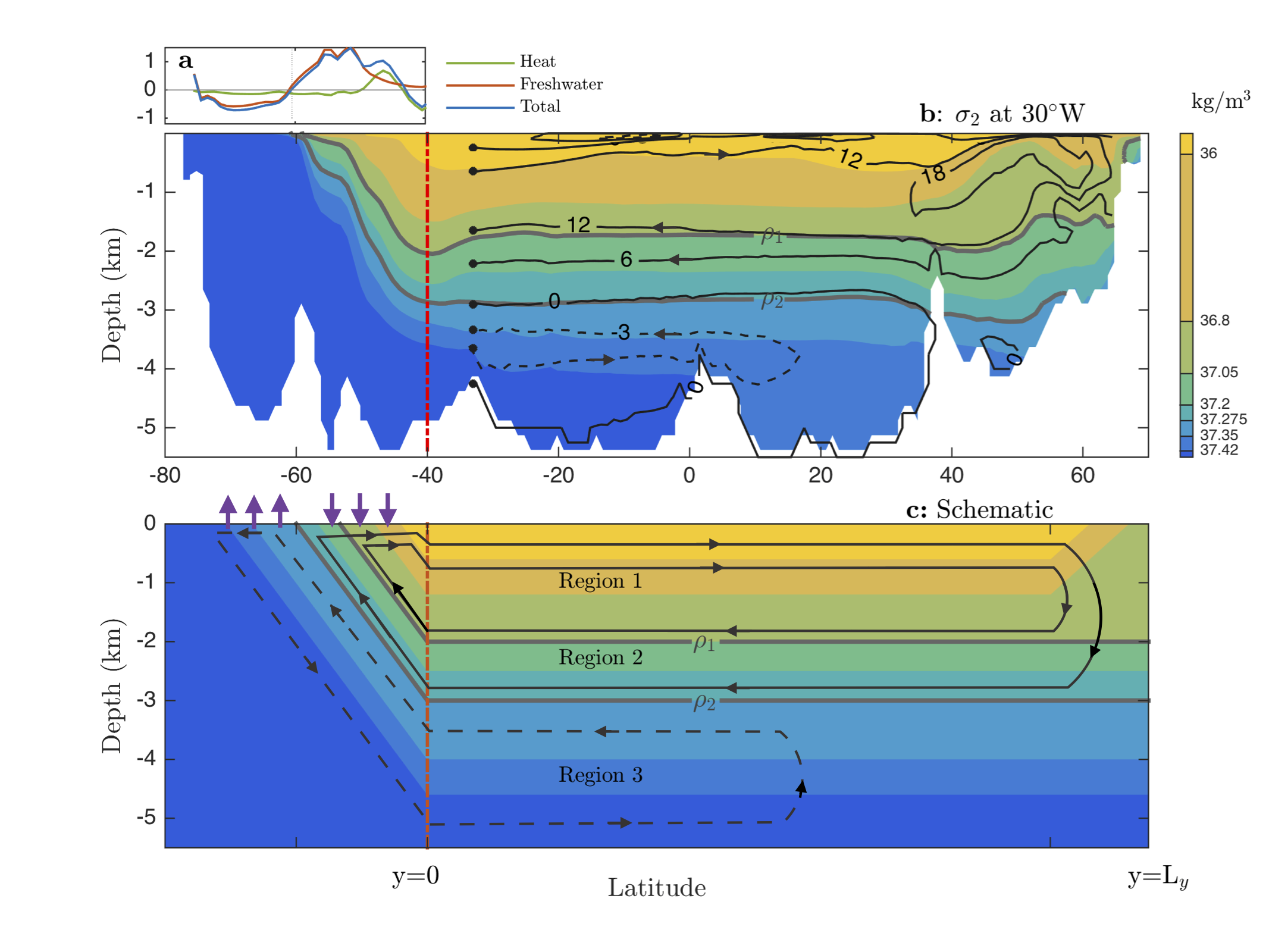